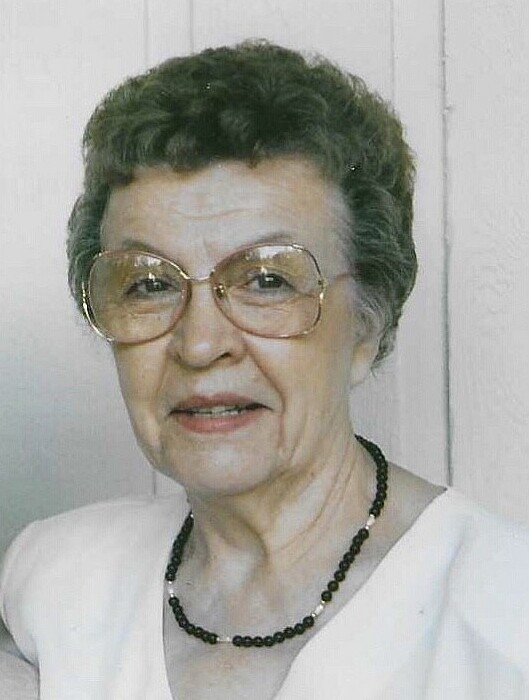 Dorothy Mildred Elizabeth Kujala (“Dot”) Myers was born on April 4,1927 in Painesdale, MI and died on September 16, 2022 in Federal Way, WA.  She was 95.   Dorothy was a beloved mother, grandmother, great-grandmother, sister, aunt and friend and a role-model for her steadfast faith in God.  A memorial service and celebration of witness to her resurrection will be held on Monday, October 17, 2 PM at Marine View Presbyterian Church, 8469 Eastside Dr. NE, Tacoma, WA.

One of eight children born to Andrew Kujala and Elizabeth (Putkela) Kujala, Dorothy was the second-eldest and the first-born daughter.  Growing up as a miner’s daughter in Michigan’s Upper Peninsula Finnish communities, she spoke only Finnish until entering public school for Kindergarten.  She remained fluent enough in Finnish to read and speak with family and friends throughout her life.  Dorothy was a proud Finn, involved in Finnish cultural activities all her life including various Scandinavian festivals in WA and OR.  In her later years she made three memorable trips to Finland and was very happy at purchasing fabric for the creation of a traditional costume for her family’s region (Oulu), which she wore to all the cultural functions.

Dorothy fondly remembered her early years in ‘the Upper Peninsula.  Her first “school bus” was a horse-drawn wagon with a pot-bellied stove inside to keep kids warm in the frigid MI winters.  A favorite childhood activity was ice-skating on the Otter river where her skill and style earned her the nickname “Feather.”

In 1944 Dorothy’s family moved to Astoria, OR.  As a high school senior she volunteered at the Lutheran Servicemen’s Center where she caught the eye of Roy Myers, Jr., a handsome, fun-loving auburn-haired sailor from Pensacola, FL.  He nick-named her “Dot.”  After earning her HS diploma in 1945 Dot returned to MI and got a job at the Big Bay Hotel, Henry Ford’s family and business retreat.   Shortly, however, Roy arrived to ask for her hand in marriage and a grand 68-year lifetime adventure began.

Dot and Roy married on January 3, 1946 in Brawley, CA just before Roy separated from the Navy.  They returned to Roy’s native Florida and their first child, Susan, was born in Pensacola, FL in December, 1946.  With the aim to live closer to Dot’s family, they moved to Spokane, WA in 1947 and lived in married student housing at Whitworth College while Dad earned his degree using the GI Bill.  Sons Daniel and Gordon were born in Spokane in November, 1948 and July, 1950.

In 1951 the family moved to Atlanta, GA so Dad could attend Columbia Theological Seminary. He was ordained in Acworth, GA in 1954 and Mom began her “career” as a pastor’s wife, naturally fulfilling that role for the next 42 years with her exemplary grace, kindness, wisdom and commitment to the Lord and to service.  Youngest child Beth was born in GA in May 1957.

Some of the most enjoyable years of Mom’s life were those she spent as an Army Chaplain’s wife after Dad re-entered military service in 1962.   During those years they lived—as Mom used to say— “in all four corners of the US and the very middle” (Ft. Rucker, AL, Ft. Lewis, WA, Ft. Hamilton, NY, Ft. Irwin, CA and Ft. Riley, KS) as well as in Germany for a two-year tour.  Mom intentionally explored and found enjoyment in every place she lived as an Army wife, sometimes reminding herself audibly “It’s interesting, and it’s not forever.”  Mom’s first grandchild was born while she was living in Germany and she decided she’d like to be called “Oma,” a moniker that was eventually used universally by nearly everyone who knew her.

In 1972 Dad retired from the Army and he and Mom bought their first home in Tacoma, WA where they remained for the next 35 years.  Mom actively took on the role of pastor’s wife once again leading children’s Sunday School, Vacation Bible School, hosting annual Mother-Daughter banquets, doing visitation with Dad and helping coordinate many other church activities.  Though she didn’t like to sew, Mom took an interest in hand quilting and for 17 years led a quilting group at one of the churches Dad pastored (Manitou Park Presbyterian).  At “Quilt Club” she made many lasting friendships and the group sold their beautiful quilts to fund various charitable projects.

Though Mom never earned a formal college degree she educated herself to the point of “expertise” in nutrition, cooking, home economics, current events and the Bible.  Important lessons were imparted during the course of any conversation/visit with Mom/Oma; for example “Everything tastes better in crystal,” document everything on the calendar (especially the Cribbage wins/losses), always date packaging so you’ll know how long laundry soap, cereal, etc. lasts,  always buy good shoes and take care of your teeth, the right napkins and candles can “make” the table and we are to love and to give.

Mom had a gift for hospitality.  She was a legendary cook and fabulous hostess and she and Dad loved to entertain.  There was never a stranger at her table; all were welcome.  We still hear from friends today about the warm welcome, memorable meals and true fellowship enjoyed at Oma’s and Opa’s.

Homemaking and having her family around was Mom’s “thing.”  She didn’t settle well into being an “empty nester.” After Beth, her youngest, went to college she and Dad hosted three exchange students—Rafael (Mexico), Kristiina (Finland) and Erkka (Finland)—between 1977 and 1981. Mom also “adopted” a number of close friends’ children, and considered them hers too.  Remarkably, she knew the names of all her children’s close friends and often asked about them; she knew the birthdates of everyone in four generations of our family as well as her and Dad’s siblings and numerous friends.  Mom/Oma  also loved card games and taught most of her grandkids to play Thirty-one, King’s Corner, Crazy Eights and Cribbage.  She played her last game of Cribbage the day before she died.  Her happiest days were always hands-down the days she connected with her family or friends.

Mom’s greatest joy and legacy were her four children, 10 grandchildren and 24 great-grandchildren.  Though Mom didn’t live geographically close to most of them she stayed interested and involved in their lives visiting whenever possible, calling, sending cards for every birthday and occasion, attending every grandchild’s graduation and later keeping in touch via FaceTime, which she learned to use at age 90.   The frequent return letters, cards, phone calls and visits from one or another of her children, grand- and great-grandchildren and friends continued to the last day of her life.

Her deep faith in God was a constant in Mom’s life and an example to others.  For as long as we can remember, she read devotions every morning while drinking her first cup of coffee and before reading the entire newspaper and working out the puzzles.  She was a voracious reader and kept her librarians as well as kids and grandkids busy finding new titles for her to read—including several they’d authored.

Dot’s passing is not to be mourned but celebrated. Aside from the infirmities of old age, her last days were pain free and without suffering.  She died quietly in her sleep.  Her intellect and wit were there until her last breath. Her caregivers loved ‘Miss Dot’ because she was as much interested in and concerned for them as they were for her. Nobody on earth, we’re sure, has a cross word for or unpleasant thought about Dorothy (Dot) (Oma) Myers. She assuredly had no enemies. Momma, you accomplished so much of great value in your life. Every person you ever met has some pieces of you in their hearts, minds and daily life.  You will live in them forever.  Godspeed, Dorothy Kujala Myers.

Memorials may be given to the Guatemala Mission Team at Marine View Presbyterian Church which partners with the Hands for Peacemaking Foundation to support safe, improved cookstove technology in Guatemalan villages.

Share Your Memory of
Dorothy
Upload Your Memory View All Memories
Be the first to upload a memory!
Share A Memory