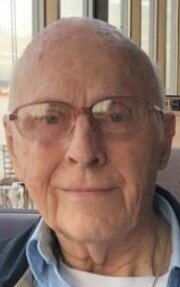 Clif went to be with his Lord and Savior, peacefully in his home in Fife WA on June 5, 2022.  Clifford Edward Kusler was born to Henry and Loretta Kusler in the town of Bismarck, North Dakota in 1934.

Clif was one of 5 children.  He grew up in Wishek, North Dakota and lived there until he was 13 years old.  His family then moved to Spirit Lake, Idaho where he graduated from Spirit Lake High School.  Clif participated in the band, and played basketball and football.

After High School, he joined the Army and served overseas stationed in France, during the Korean war.  While serving he was able to travel to Spain and Italy.  After the military he went into the work force and attended the University of Puget Sound.  Clif then landed a position with NCR (National Cash Register) as an apprentice.

On October 17, 1959 he married his sweetheart Caroline Kusler.  They had three children:  Duane, Dale, and Donald.  Clif and Caroline were married 62 plus beautiful years.

Clif worked for NCR while they lived in Tacoma.  They bought a pear orchard in Leavenworth in 1974 and maintained that property for 3 years.  In 1978 they moved to Fife and had their home built.  During this time Clif worked for the United States Postal Service at the Bulk Mail Center in Federal Way, WA.  In 1980 they purchased their raspberry farm “Kusler Farms” in the Fife valley.  He was an extremely hard worker all his life.  He farmed all day long and worked evenings at the Post Office Bulk Center to provide for his family.

Besides spending time with his family, he loved the outdoors and enjoyed camping and fishing.  Clif also tinkered around and fixed things.  He had such a knack for repurposing things and using what he had around the farm/house.  He was thrifty and mechanically inclined.  He especially loved Caroline’s cooking and often had a sweet tooth for her baked goods.  Clif was a jokester and had a terrific sense of humor, known to his family, nieces and nephews for his “one liners.”

Clifford Kusler is proceeded in death by his parents, siblings, and son Dale. Clif is survived by his wife Caroline, sons Duane and Donald (Stacy) Kusler, his grandchildren:  Christopher, aka CJ (Jordyn), Katie, and Keyon.  Great granddaughter: Kolbee.

The family would like to acknowledge and thank the VA, Franciscan Hospice, and the many caring nurses for their compassionate and loving care.

Share Your Memory of
Clif
Upload Your Memory View All Memories
Be the first to upload a memory!
Share A Memory