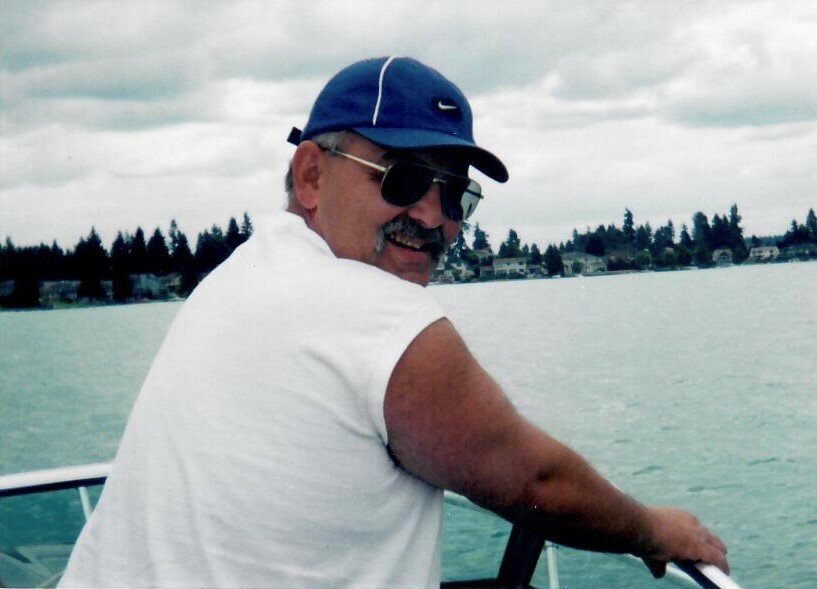 Carl was born, December 23, 1948, a baby boy gift from Heaven to his loving parents, Carl and Virginia Fisher, and his two older sisters, Marlene and Paula.

Carl was raised in a beautiful home on Pacific Highway in Tacoma, Washington where “Junior,” as they called him, experienced a fun childhood filled with classic boy adventures of shooting bb guns, building models of cars, riding bikes, and boxing with his best friend, Billy Davis!

Shortly after Carl’s 13th birthday his happy childhood was turned upside down when his dad passed away unexpectedly from a massive heart attack.  Carl’s best friend Billy had also lost his mother and father in the years prior which created a special bond between them that lasted his lifetime.

Carl attended Fife schools where he made several great friends including Ron Johnson, Tim Nichols, Bob Stack, and later, a new student, John Shol, with whom he shared his childhood love of cars.  They, too, remained “buddies” for life.

A few years later Carl met Vickie Auge at the Brick Tavern where he used the pick up line, “Hey! I know you!” to which Vickie responded, “Well, I don’t know you!”  Carl and Vickie eventually got to “know” each other and married in 1981.

Carl had a dream of building his own home.  In 1982 he built a beautiful home for his bride on a hill in Bonney Lake, WA.  His family had expanded with Vickie’s 6-year-old daughter, Chanda.  Later, Carl and Vickie had a son, Ian, born in 1986.

Carl had a passion for Rainier beer in his young adult years, but pain and loss accompanied it.  One day at age 40 he experienced an incredible conversion and vowed to stop drinking altogether.

The hardships of life still came, as they do. Carl could have easily justified drinking again, but he never did.  At the time of his death he had held to his vow of sobriety for 32 years!  He was very proud of this accomplishment in his life and humbly shared his testimony of regrets and recovery with those he had impacted and anyone open to hear it if they could be helped by it.

Carl’s passions and interests were cars, car shows, drag racing, football, and boxing.  He loved camping and fishing on family vacations at Teanaway in Eastern Washington.  One day he refurbished the interior of an old boat, fulfilling a dream of owning one and taking it on vacations for tubing!

Carl was a builder, maker, and fixer.  He was curious and inquisitive and liked to contemplate mysteries and try to figure things out.

He was straight forward, sincere, and held deep convictions and strong political views.  There was nothing hidden with him.

Through the years Carl worked as an automotive shop owner/mechanic and semi-trailer truck driver.  He had a passion for cars and a dream to own his own automotive shop which came true with CF Auto and later CF Automotive.  However, most of his working career was spent as a semi-trailer truck driver offering him Teamster membership through Nichols Trucking, 12 years, and later more benefits for his family driving semi trailer for Murrey’s Waste Connections, 25 years,  until his retirement in 2014.

Despite what he described as his “not the Rockefellers” income, he was charitable later in life and made regular donations to “Paralyzed Vets” and the “Pierce County Sheriff Dept”.

In the 32 years of Carl’s sobriety his family remembers his love and selflessness.  He never bought anything for himself, except work boots and bibs that clothed him to provide for his family.   His family was first on his mind right up to the end.

He loved his family and friends.

Carl’s friends - who referred to him as, “The Fish” or “Fisher” - remember him as a “good buddy,” “a genuinely nice guy” with a “soft heart” who “would do anything for you if you asked.”  “Everybody liked Carl,” they said.

Carl had a great sense of humor and the absolute best laugh and smile that those who love him will so dearly miss!

Carl is preceded in death by his parents, Carl and Virginia Fisher, sister, Marlene,  brothers in law, Bob and Bill, and dear friends, Tim Nichols, Doug Peterson, and Scott Newkirk.

Please join Carl’s family and friends as they share prayers and stories in celebration of Carl’s life.  The Chapel Service and Light Luncheon Reception will be held at:

A special, heartfelt thanks to Fr. Matthew O’Leary and Good Samaritan’s Chaplain Peter for their love, kindness, and selflessness, as they entered Covid ICU, Room 517, on November 3, 2021 for Fr. Matthew to administer the Sacraments of Baptism, Anointing of the Sick, and Last Rites to God’s beloved son, Carl Frank Fisher.

A special thanks also to the ICU Nurses at Good Samaritan Hospital who lovingly cared for Carl, playing music of his favorite band, Journey, especially the song, “Don’t Stop Believin’” which was a theme of faith, hope, and love throughout this “journey”, and will live on in BELIEF of the life of the world to come.

This is not the end of the story!

Lastly, Carl passed away due to complications of Covid-19 and lingering injuries from a Covid vaccine.  Some of his last words to family were, “Take care of yourself!”

He would want you to know that once you are hospitalized it is too late to receive the early, anti-viral therapies of ReGeneron monoclonal antibodies (mAB) or Ivermectin; that you must be within 10 days of symptoms or within 5 days of a positive test in order to receive ReGen mAB; and that it’s also important to receive early, anti-inflammatory treatment of steroids due to vasculitis associated with Covid-19.  Ultimately, he would want you to know that, whether or not you are vaccinated - EARLY TREATMENT SAVES LIVES!

For more information about Carl’s adverse reactions to the Covid vaccine that led to his first hospitalization where he contracted Covid-19 you may email his family at:  FisherFacts@gmail.com

Share Your Memory of
Carl
Upload Your Memory View All Memories
Be the first to upload a memory!
Share A Memory