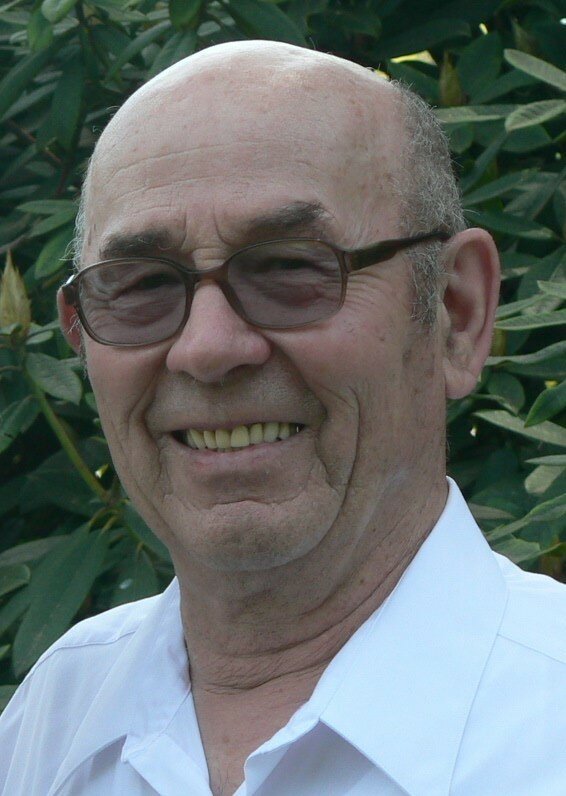 Known as Archie to his Swiss family and friends, he was the youngest, and last surviving, of eight siblings. His father was a dairyman when Archie was born at what was known as the Kelly Place, a rented dairy farm property located near the Swiss Park in present day Bonney Lake. In 1928 the family moved to Sumner and Karl turned to carpentry as the primary means of providing support for his family. As a youngster during the Great Depression and a teenager during World War II, Archie helped his parents by working various jobs, including picking vegetables and berries at local farms and, during the summers, in California. He attended Sumner schools and graduated from Sumner High School in 1946.

In the fall after graduation, he enlisted in the Army and spent 15 months supporting post-war efforts in Japan. Following the call of duty, he attended college at St. Mary’s in San Antonio, Texas, and St. Martin’s in Lacey. In 1953, Archie began a 20-year career working as a bottler and deliveryman for Sanitary Infant Dairy in Puyallup. Changing vocations, he worked nearly 18 years as a furnace technician before retiring from Pacific Coast Oil Company in 1991.

In 1958 Archie married Elizabeth Von Moos, whom he had met six years earlier at a Swiss dance in Los Angeles and to whom he was married for over 63 years. That same year the couple purchased an unfinished residence in Puyallup that would be their home for nearly 60 years. While he received some assistance with cabinet installation and electrical wiring, Archie did most of the work to finalize the construction. In the 1960s, three surviving children, Joseph, Susan and Laurie, were born to the Baurs. The family maintained a bountiful garden and always had a mini-farm that included goats, sheep, rabbits, calves, ducks and chickens. Demonstrating tremendous foresight, Archie employed organic farming techniques many years before they became popular.

Archie was very proud of and knowledgeable about his Swiss heritage. He could speak a bit and certainly understand Swiss-German, a language that his parents spoke in the home. He was a dual U.S. and Swiss citizen. His father built the original hall building at the Bonney Lake Swiss Park and Archie was a near lifetime active member, and past president, of the Swiss Sportsmen’s Club that held its events and managed its affairs out of that building. In his younger days, Archie was a “schwinger,” or Swiss wrestler, and he traveled up and down the west coast attending and competing in annual Schwingfests. Later, he took up singing and was a member of the Swiss Mannerchoir. Archie worked Schwingfests and other Swiss community events and truly cherished his Bonney Lake Swiss Park membership and the friends that he made there. Twice, in 1991 and 1995, he and Elizabeth took trips to Switzerland where they were honored to visit relatives and the cities of Riggi, Schtos, Zermatt, Bern, Schweiz, Zurich, Santis and Pilatus.

Archie is survived by son Joseph (Suzie) and daughters Susan (Eric) and Laurie (Scott); grandchildren Doug, Nicole, Lauren, Olivia and Sophie; and many nieces and nephews. He was predeceased by his parents, all his siblings, his wife, Elizabeth, who passed away recently, and infant daughter Mary.

A funeral will be held on Wednesday, September 22 (viewing 10:00 am, rosary 10:20 am, funeral mass 11:00 am) at St. Andrew Catholic Church in Sumner. A luncheon and celebration of life will follow at the Swiss Sportsmen’s Club in Bonney Lake. Masks are required and outdoor seating will be available at the celebration of life. In lieu of flowers, donations may be made to the Swiss Men’s Society Scholarship Fund or Swiss Sportsmen’s Club of Tacoma Kids Kamp (both at 9205 198th Ave. E., Bonney Lake, WA 98391) or to the American Heart Association.

To send flowers to the family or plant a tree in memory of Walter Baur, please visit Tribute Store

Share Your Memory of
Walter
Upload Your Memory View All Memories
Be the first to upload a memory!
Share A Memory
Send Flowers