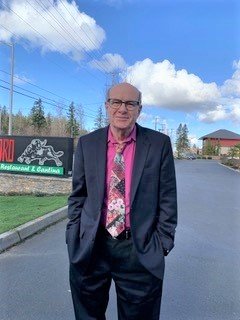 John Nicholson Payne died August 26, 2020 in his home in Puyallup, WA after a courageous battle against Alzheimer’s disease. He was 77 years old.

John was born in Jacksonville, FL on August 29, 1942 to Gertrude Nicholson Payne and Hubert Newton Payne, Jr.  Because his father was serving in the Navy during WWII, John’s mother moved them to Collinsville, AL to live with her parents when he was only a few months old. John had fond memories of living with his grandparents during those first 5 years of his life.

When the war was over, John’s dad moved the family to Decatur, GA where he worked as a Civil Engineer. John loved growing up in Decatur where he quickly became friends with several of the young boys in his neighborhood. Many of those friendships continued throughout John’s life.

After graduating from Decatur High, John attended Georgia Tech, graduating with a degree in Mechanical Engineering. Through his participation in the Westminster Fellowship, John felt the call to ministry and entered Columbia Theological Seminary where he obtained his Masters in Theology. John completed a 1-year chaplaincy program after graduating from seminary. In 1990, he graduated from the University of Mississippi, Oxford, MS with a PhD in Counseling Psychology.

In 1969, John married Virginia Jenkins of Madison, GA. They moved to Tupelo, MS in 1970, where John became the Associate Pastor of First Presbyterian Church. Their son, Miles, was born October 29, 1972.  Later, John and Virginia moved to Jackson, MS, then divorced in 1984. Shortly after the divorce, John moved to Nettleton, MS to be the pastor of Nettleton First Presbyterian and Unity Churches.

In 1987, John married Kattie Bell Sullivan who had two children, Micah and Heather Sullivan. John had great stories of their blended family honeymooning as a family. All three children have wonderful memories of vacations and camping together. Micah and Heather grew to love and respect John for his unconditional love.

John’s family and many friends will remember that John treasured his first car, a 1967 Chevrolet Chevelle. He was so proud that he learned to care for the car himself, with occasional advice from local mechanics. He finally separated from his car, after several hundred thousand miles, when he gave the precious car to his son, Miles. John was so happy that Miles loved and cared for that car just as he had.

In 1993, John and Kattie moved to Boise, ID and John became the pastor of small Idaho churches.  He was the pastor of King Hill Presbyterian and Glenn’s Ferry Methodist. Keeping the differences between denominations straight, such as “debts” and “trespasses” in the Lord’s Prayer, and remaining seated vs. kneeling at the alter for the Lord’s Supper, provided fond memories for John and the congregations. Later, John became the pastor for Weiser Presbyterian Church, Weiser, ID and remained there until he retired from the ministry.

After retiring from the ministry, John continued to serve God’s older adults by being a Chaplain for Ministry to the Aged in Boise, ID. John served two main Care Centers in Boise, Avamere, and Apex. John found ministry to the older population very rewarding. He always paid special attention to those residents who didn’t have family visits. He spent many Christmas afternoons visiting those friends. In 2018, John ended his 25-year Chaplaincy when he and Kattie moved to Puyallup, WA to live with Heather and her family.

John is preceded in death by his mother and father, Gertrude Nicholson Payne and Hubert Newton Payne, Jr. and by his stepson, Micah Sullivan. John leaves his sister, Millie Reddig, her husband, Duane, and her children Preston Keating, Carson Ramos, and Adair Keating along with many aunts, uncles and cousins.  John leaves the family he formed, which includes his son, Miles Payne, Amy, his wife and their two children (Davis and Greta) of New Braunfels, TX; John’s wife Kattie of Puyallup, WA; Andrea Sullivan, Micah’s wife, and their boys (Lee and Gabe) of Boise, ID; and Heather and Marcus Hackler and their boys (Liam and Greyson) of Puyallup, WA.  John left his family with the legacy of the importance of loving relationships among family members and friends.

John’s view of Christian Theology was that Christ taught us to love and care for each other. He lived his life in a commitment to God and to relationships with his fellow man. John will be cremated in Puyallup, WA and then transported to Boise, ID where he will be laid to rest alongside his stepson, Micah Sullivan, in Morris Hill Cemetery. The family will conduct memorial and graveside services in Boise in September, with the memorial service streamed online for those who cannot attend in person. The family has set up a website for celebrating John’s life at www.celebratejohnpayne.com which contains photos, stories, and selected sermons from John’s time in ministry. An announcement of the memorial service date, along with the opportunity to RSVP for online or in-person attendance, will be on the website as well.

In lieu of flowers, the family requests donations to the Alzheimer’s Association, Wyakin Foundation, and Ministry to the Aged.

The family would like to recognize Olivia Koelsch from Deer Ridge Memory Care Community, Puyallup, WA for her kind and loving help during John’s last few weeks of life. She and Koelsch Communities will always be remembered. In addition, the family wishes to express appreciation for Jake Gamble and the Generations Home Care staff for their compassionate care of John. They were truly a blessing.

Share Your Memory of
John
Upload Your Memory View All Memories
Be the first to upload a memory!