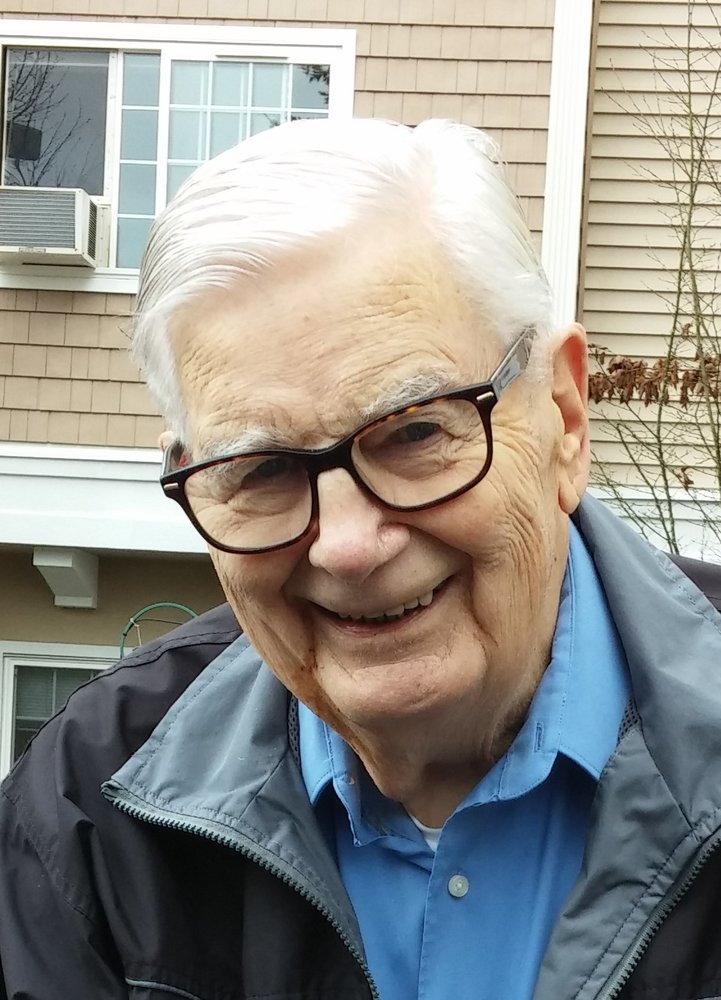 “What does the Lord require of you?  To do justice, love kindness,

and to walk humbly with your God” Micah 6:8

Frank Rush lived his life with a deep faith, much joy, wit and wisdom.  We are so blessed that we got to be a part of him!

Born October 4, 1924, he lost his father when he was two years old, and was then raised, along with his three older siblings by his single mother  His family enjoyed the stories he told of his childhood playing stick ball and kick-the-can in the street with the neighborhood kids, and of sharing one bike with his brother and two sisters.

After high school, he was recruited into the Navy as an Officer Candidate, and in 1945 he received his commission as a Lieutenant JG.  His assignment was a mine sweeper in the Pacific.

After leaving the Navy he used the GI Bill to complete his degree in Electrical Engineering at the University of Washington and began a 44-year career at Bonneville Power Administration.  During this time, he met and married Donna, a local girl, having fallen for her beautiful smile.  This October would have marked 70 years together. Frank and Donna raised five daughters and a son, Judy Heid (Kevin) from Spokane; Debra Mayer, Carla Lawson (Steve); Cynda Mack (Jerry); Martha Whelan (Ron) and Larry Rush, nineteen grandchildren and 18 (so far) great grandchildren.

As a child of the Depression era, Frank had a dream of living on a lake.  With his brother-in-law’s help he realized that dream, building the family home on Trout Lake in 1957.  They lived there for twenty-five years.

As a devoted Husky fan, Frank spent many fall afternoons “coaching” Jim Owens and Don James from his living room sofa, on the finer points of winning.  Frank was also especially fond of “Sing Along with Mitch”, Gilbert and Sullivan and Broadway show tunes.  But his very favorite musical act was his children singing.

Frank was the spiritual head of his family, quietly modeling a prayerful life of faith.  He and Donna were active at All Saints Catholic Parish in Puyallup until their move in 2013 to Foundation House Retirement Community.  They began attending St. Vincent de Paul in Federal Way.

A private funeral mass will be celebrated on Saturday July 18.  Memorials in Frank’s name can be mailed to Francis House, PO Box 156, Puyallup, WA 98371.  www.puyallupfrancishouse.org

Our family encourages online memories of Frank be shared at www.curnowfuneralhome.com

Share Your Memory of
Frank
Upload Your Memory View All Memories
Be the first to upload a memory!