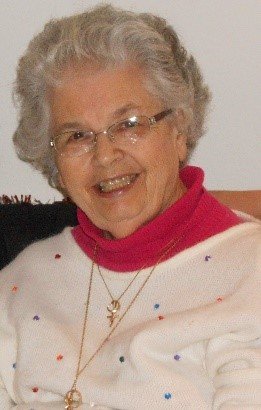 Jackie Johnson went home to her Lord Jesus February 17 in Mercer Island, Washington at the age of 91. Jacqueline Jean Scroggins was born November 24, 1928 in Chicago, Illinois, the only child of Floyd and Alice Scroggins. She grew up in the Chicago area and attended school there until she went to high school at Kemper Hall Episcopal School for girls in Kenosha, Wisconsin. Upon high school graduation, Jackie attended Culver-Stockton College in Canton, Missouri. She graduated with her Bachelor’s degree in 1950. At Culver-Stockton that she met the love of her life, Burt Johnson. They were married June 30, 1951 just before Burt left for Korea. Burt returned home from Korea on Valentine’s Day 1953. It was always a special day for them. They were married for 63 years, until his death in September of 2014. Jackie worked as a stock analyst for Stein Roe & Company for many years until starting a family.

In 2016 Jackie relocated to Covenant Shores on Mercer Island and resided there until her passing. The Health Center staff lovingly attended to her in her final years. She is survived by her three children Cliff (Teri), Kathy (Paul) and Burt (Debbie) as well as 6 grandchildren and 2 great-grandchildren. Jackie loved her church, Emmanuel Episcopal Church, and was actively involved in all aspects of church life. In addition, she served as the church secretary for several years.

Jackie’s love was her family. Holidays and birthdays were always the focus of family gatherings. Her family grew through marriages and births. The meals and celebrations became almost 30 people. She was a gourmet cook and loved to prepare meals and special deserts for others. Jackie was a doting Grandmother and a true friend to those in need.

To plant a tree in memory of Jacqueline Johnson, please visit Tribute Store

Share Your Memory of
Jacqueline
Upload Your Memory View All Memories
Be the first to upload a memory!
Share A Memory
Plant a Tree