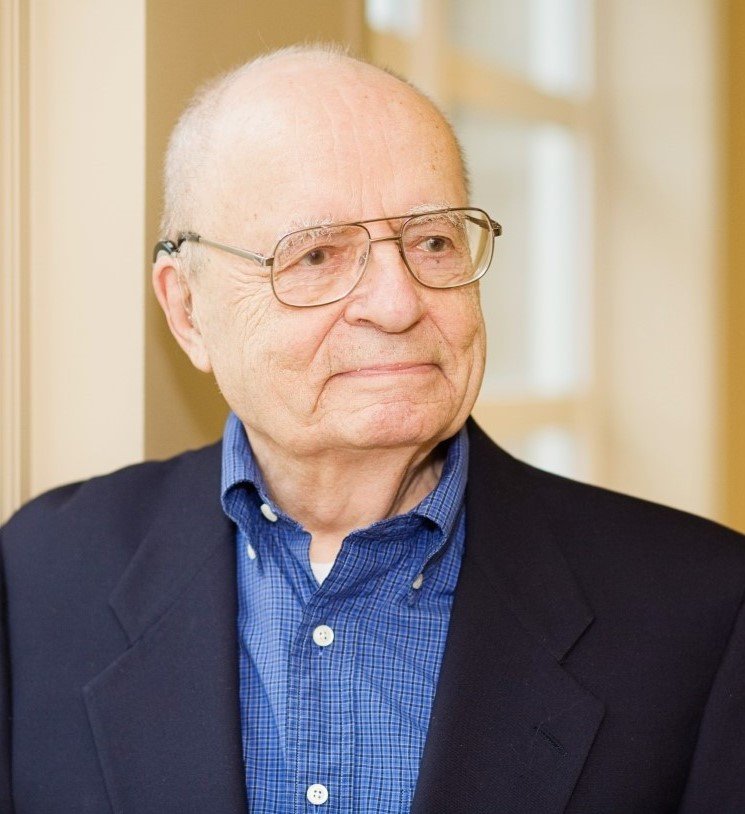 Ralph was born in Nelson, British Columbia, Canada, on January 27, 1921.  He was the son of Nora (Given), an immigrant from Edinburgh, Scotland, and Walter Myers, a transplant from Illinois.  His older sister was Marjorie.   He led a long and fulfilling life, remaining engaged and interested in everything around him until the end.  He died peacefully at the age of 98 on August 25, 2019.

Ralph spent many summers with his Dad inspecting mines throughout British Columbia and northern Idaho.  He loved going to the “big city” of Spokane for special events.  Ralph spent two years at the University of Idaho, following in his father’s and sister’s footsteps.  After Pearl Harbor he left school to join the Canadian Army Signal Corps and served as a 1st lieutenant.  He spent most of his time in England and Belgium.  While stationed in England he met and married London school teacher Jane Hogg.  After the war he returned to Idaho to complete his civil engineering degree.

He and Jane spent several years in Idaho and once he received his US citizenship, moved to Seattle, worked for the city, and eventually landed his dream job - an engineer at Boeing.  He worked there for 35 years, retiring in 1987.  He had many roles at Boeing, including inspecting wings (he was short!), a liaison engineer (a natural for him to be a go-between between designers and assemblers), and toward the end of his career he travelled the world, teaching post-sales maintenance to Boeing customers.  This was a perfect job for him as he loved teaching, talking, and meeting new people.  He had wonderful stories and pictures from places such as China, Australia, Malaysia, Saudi Arabia and Great Britain.  True to his nature, he would immerse himself in the culture and made friends with the engineers and mechanics he was teaching.  His favorite event would be an invitation to a local home for dinner and an opportunity to experience their lives first hand.

Ralph and Jane had 3 children.  Michael (deceased 1992), David (Carol) and Elizabeth (Michael).  Both David and Elizabeth now live in the Phoenix area.

Ralph’s wife Jane was murdered in 1962.  In 1964 he met and married Wanda Butler Ellsworth.  Wanda had 4 children: Shanae (Don), Bob (Pam), Steven (Michelle), and Sam (deceased 2012) (Shama).  They finished raising their families together and were married 55 years.

Ralph spent his life absorbing the world.  He “never met a stranger”, talking with anyone nearby – the person in front of him in the grocery line, new neighbors, co-workers, friends of friends – no one escaped!  He had a special knack for being genuine and engaged, thus developing many, many friendships throughout his journey.  He loved his children and their accomplishments – always ready with a story and “bragging rights”, and extended his praises to his grandchildren and great grandchildren.  He always wanted to know what each person had been up to, their work and school experiences.  If you were a child, grandchild, great grandchild of Ralph, everyone around him knew all about you.

To fill their shared wanderlust after retiring, Ralph and Wanda bought an RV and traveled throughout the US and Canada for several years – visiting nearly every state and province including family roots towns in Illinois and Idaho.  They visited every continent, with destinations such as England visiting family and his WWII stations, Scotland including his mother’s home in Edinburgh and family, the Great Wall of China, France and Germany, Australia family, Mexico, Turkey, a cruise down the Nile, Vietnam for a grandson’s wedding, and their last trip a cruise around South America and Antarctica.  He often wrote a journal of his adventures so he could retain and share his experiences.

In 2002 Ralph and Wanda moved from their family home to Kirkland and eventually Woodland Terrace, a retirement community in Bothell.

Ralph was a member of several organizations and actively volunteered throughout the years:  Masons Lodge, Phi Delta Theta fraternity, and Royal Canadian Legion.

Services will be held September 21st at 11:00 at Northlake Unitarian Universalist Church in Kirkland.  Interment is at Washington Memorial Cemetery in SeaTac, on Monday September 23rd at 10:00.

In lieu of flowers, the family invites donations be designated to the Northlake Unitarian Universalist Church where Ralph was a beloved member, to be used for building access improvements.

To send flowers to the family or plant a tree in memory of Ralph Myers, please visit Tribute Store