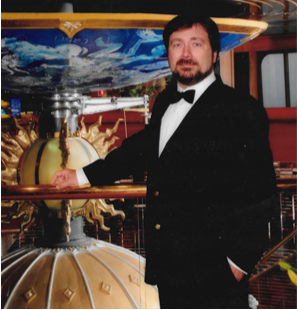 Terry was born February 3rd, 1962 in Seattle, Washington. He went home to be with his Lord and Savior, Jesus Christ on December 31st 2022 at 60 years of age. Terry is survived by his wife, Cathy; children Tim (Angela), Ben (Abbie) and, Stephanie (Justin); grandchildren Sophie and Serenity; father Ted (Jennie) Sharp; mother Judy Langkow; and sisters Julie, Norma, and Susan, as well as many nieces and nephews.

Terry grew up in Seattle and Bothell where he developed many of his life long passions. Terry's love of art manifested in painting and drawing which served him well in the Air Force where he produced slides for the General's presentations. Terry always loved to be outdoors in nature whenever he could, whether it was hiking, hunting, fishing, or camping with family. He built his beloved cabin on his property in Shelton where he loved to get away as well as enjoy quality time with family and friends.

Terry's other joys included making wine, taking care of the yard, spending time at his goldfish pond, and playing his favorite video games (especially Halo) with his granddaughters. He always showed his competitive side at our annual cribbage and corn hole tournaments.

Terry spent most of his career in maintenance. He loved fixing things and excelled at it. His last job involved fixing and maintaining homes for military soldiers and their families where he felt he was giving back to the military community.

*Photo of Terry dressed to the nines on an Alaska Cruise, circa 2010*

Share Your Memory of
Terrance
Upload Your Memory View All Memories
Be the first to upload a memory!
Share A Memory