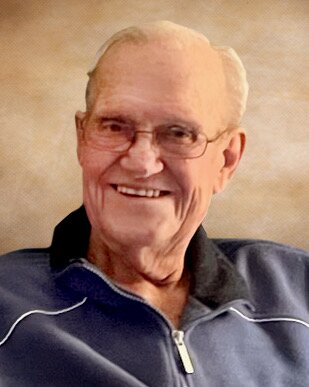 Rolland “Rollie” Duane Oelschlager diedpeacefully at home on December 29, 2022 in Puyallup, WA at the age of 84.

Rollie was born on February 12, 1938 in Faribault MN to Felix & Lillian Oelschlager. He graduated from Zumbrota High School in 1956 where hisbasketball record of 17 free throws in a row still stands.  He married LeEtta Gleisner December 2, 1961.  They made their home in Zumbrota until September of 2008 when they moved to Washington State to be close to their grandkids(and kids).

Rollie worked for the Rural Electric Association for many years before being a founder of the Covered Bridge Supper Club in Zumbrota.  After moving on from the restaurant business, Rollie had a very successful career selling insurance and investments.  This career allowed Rollie and LeEtta to travel the world.  Everywhere Rollie went he made friends. He loved going to the ocean, golfing, fishing, hunting, playing cards and spending time with family and friends.  WhenRollie danced it was the Lindy and when he sang, it was ‘You Are My Sunshine.’

Rollie touched the lives of people around the world.  He always had a story to tell.  His smile and laugh will be missed by many.  Services are pending in both Washington and Minnesota.

To send flowers to the family or plant a tree in memory of Rolland Oelschlager, please visit Tribute Store
Monday
9
January

Share Your Memory of
Rolland
Upload Your Memory View All Memories
Be the first to upload a memory!
Share A Memory
Send Flowers