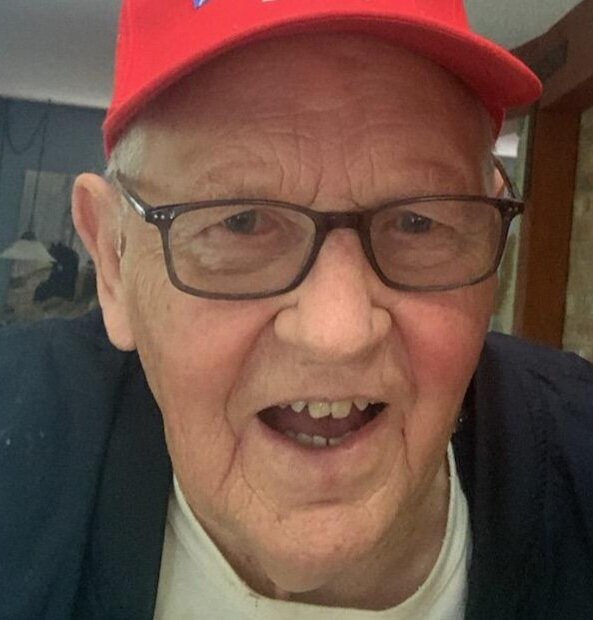 Paul Louis George, age 91, a resident of Duvall, Washington for 60 years, died on Sunday, October 9, 2022 at Evergreen Hospital, Kirkland, WA, after a brief illness. He is survived by his daughters, Joleen Smith (Duane); Terri Anderson and Shelley George; 16 grandchildren including numerous great and great, great grandchildren. He is also survived by his 99-year-old sister Kathleen (George) Howe and many nieces and nephews. Preceding him in death: his beloved wife of 62 years, Verleen Ann Reiner George, his mother and father, Alma and Louis George, his sisters Virginia Dean, Elsie Delp and brother Elton George. Paul was born and raised in Monroe, Washington on August 22, 1931. He graduated from Monroe High School in 1949, working as a sawyer and mill worker until he joined the US Navy Seabees in December 1951, serving in Korea for four years until November 1955. He had another tour in reserve Navy unit until discharge in December 1959. Paul met Verleen at the Boeing plant in Renton, Washington where they were both employed. They were married on September 16, 1957.

Paul had many skills and put them to use raising his family. He moved to the Snoqualmie Valley around 1960, farming at Pleasant Hill Farm in Carnation where he was a major dairy farmer in the valley, having earned the distinction of Darigold Dairy Family Merit award one year. After the sale of the dairy farm around 1962, Paul and Verleen took a three-month trip to Alaska with the family. It was an epic adventure, starting in California picking up the Shasta travel trailer at the factory and stopping at Disneyland, Knox Berry Farm and other tourist destinations of that time. The ultimate adventure was the trip through Canada, Yukon Territory to Alaska to the tip of the Kenai Peninsula, camping and fishing at the lakes along the way. Upon their return, they settled on Novelty Hill in Duvall where they both lived until their deaths. Paul was a builder and eventually built the main brick house for his family, including digging the pond, the swimming pool, all the clearing of trees for pastures for livestock and major landscaping over the years. Both Paul and Verleen were avid gardeners - flowers, nursery stock and vegetables to can for winter and feed a family of 8 and then all the relatives too. Whatever they couldn't grow they would drive over the pass to Eastern Washington to stock up on tomatoes, apples, peaches, apricots and cherries. Hundreds of jars of fruit and vegetables. They also raised their own beef and pork, which would be custom cut by Grandfather, John C. Reiner, a master butcher.

Upon settling in Duvall, Paul took a job with the City of Seattle, Water Department, working at the Tolt Dam as a water treatment chlorinator. He retired after 32 years. Before he retired, the folks also were business owners of Cricket Arts & Craft, in Lake Forest Park and later a second store in Woodinville. These stores were very successful. They owned these businesses for about ten years. After the sale of Cricket Arts & Craft, they became snowbirds and spent over ten years living in Bahia de Los Angeles, Mexico. Again, Paul built a home for them on the beach. They loved their desert hacienda, desert gardens and daily fishing in the ocean.

Sometime after their return from Mexico, Paul took on the role of land developer -- again, building. He developed the landlocked land his mother, Alma George, left to him, his sisters and brother. He worked tirelessly for the family. This land was located just beyond the Monroe Prison very near the bridge that crosses the Snohomish River, on Tester Road. This is the area where the current 522 was cut through the George property by eminent domain and it became landlocked. Dad unraveled it all, put in wells to the parcels and developed the lots for sale. A monumental task for anyone. Today, the land has many homes up on that hill and it was a successful venture.

Paul lived at his home in Duvall up until his death, which was his wish. He had many dear friends, neighbors and relatives. We will be having a Celebration of Life on Friday, November 11, 2022, at 11:00 a.m. at Holy Innocents Catholic Church, Duvall, WA, meeting room, lower-level area. We will also have an Honor Guard service at internment at Novelty Hills Cemetery in Duvall, WA at 1:30 pm. All are welcome to attend. We kindly request no visitors to the George family home.

Share Your Memory of
Paul
Upload Your Memory View All Memories
Be the first to upload a memory!
Share A Memory