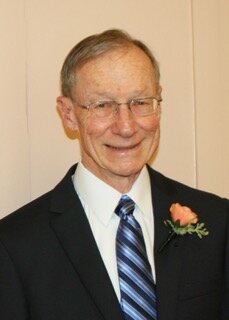 Gene Hammermaster, born Albert Eugene Hammermaster on May 5, 1934, died peacefully in his sleep on July 23, 2022. He was 88 years old. Gene grew up in Puyallup, the son of Albert Hammermaster who worked for the railroad, and Clara Hammermaster who raised 4 children and later in life, a beautiful garden. Gene was the oldest of her 4 children and graduated from Puyallup High School and later from University of Washington Law School. Gene served for 6 years in the Air Force Reserves and began his legal career as a lawyer with Jacobs and Peters in Sumner. He later started his own firm in 1962.

Gene married Sylvia Morse of Buckley in June of 1962. They celebrated 60 years of marriage, living in downtown Sumner and raising their son, David, who was born in 1966. David followed in his father’s footsteps and joined Hammermaster Law Offices in 1992. For over 30 years, their awnings and legal expertise have been a staple of Main Street Sumner. Gene worked up until mid June, just a month before his death. He served as a lawyer for over 60 years, making him one of the longest working lawyers in Washington State. For over thirty years Gene acted as municipal judge for the cities of Sumner, Orting, Wilkison and Carbonado. Many of the people that came before his bench have commented on how the way he dealt with them changed their life as he gave them second chances, and encouraged them to work and find purpose. His life has been marked by many remarkable things, but his commitment to his career and community stand strong in his heritage.

Gene and Sylvia have attended Valley Bible Church in Pacific for many years. He served as chairman of the missions committee and hosted many mission conferences. He was passionate about aiding the endeavors to spread God’s Word.
Gene enjoyed many hobbies including hiking, mountain climbing, growing hundreds of tomatoes plants every year, and spending time with his grandchildren. Gene was active in the local Rotary Club and other community service organizations in Sumner. Gene leaves behind a strong testimony of service to his community, love for his wife and family and commitment to his Lord. He will be dearly missed.
Gene is survived by his wife Sylvia; son David and daughter-in-law Susan; six grandchildren (Bethany Gamboa, Michaela Wilson, Kate Hammermaster, Nathan Hammermaster, Allison Hammermaster, Sarah Hammermaster) and six great grandchildren (Emmett, Gwen and Darian Gamboa; Gene, Genevieve and Zeke Wilson) He is preceded in death by his brother Rich and survived by his two sisters, Jan Kessler (of Manhattan Beach, CA) and Linda Erwin (of Littleton, CO).

To send flowers to the family or plant a tree in memory of Gene Hammermaster, please visit Tribute Store
Tuesday
2
August

Share Your Memory of
Gene
Upload Your Memory View All Memories
Be the first to upload a memory!
Share A Memory
Send Flowers