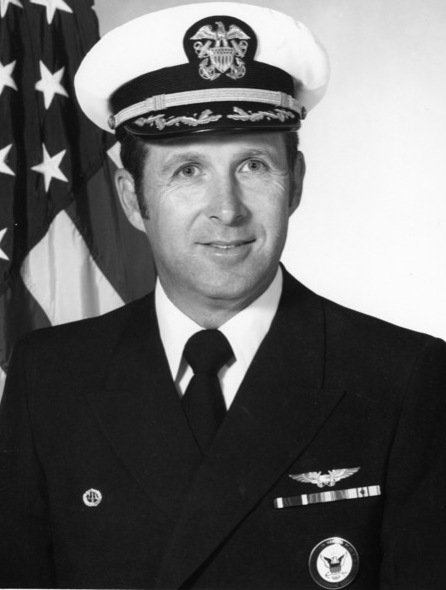 Ken graduated from Western High School in 1952, in Silver City. Then in 1956 he graduated from New Mexico Western College with a Bachelor’s Degree in Commerce and a minor in Arts & Crafts. Ken put himself through college by working at the Silco Confectionary as a Soda Jerk from ages 13 – 22.

After graduation Ken joined the Navy. He liked their four different uniforms. Ken was commissioned an officer in 1956. He earned his Naval Aviator Wings in 1957. Ken was then ordered to report to the Air Anti-Submarine Squadron VP-38, in San Diego, California. Ken served four years in the Navy, flying over 100 missions off the carrier USS Hornet in an S2F aircraft.

After four years in the Navy, he accepted a job in El Paso, Texas with Standard Oil company as an accountant. While in El Paso, Ken met and married Velma Wagner on 24 December 1960.

Life as a civilian was not challenging enough so Ken re-entered the Navy. In 1962 he earned his Naval Flight Officer insigna while in Pensacola, Florida where his first child, Kenneth Clifford Lee, II was born. Lieutenant Lee reported to Patrol Squadron VP-42, Naval Air Station North Island, San Diego, California. San Diego is where his second child, Kimberly Adriane Lee was born.

In 1964, Ken was in Vietnam for six months. During his time in Vietnam, one of their planes went into the water. After the Navy Review Board evaluated the incident, his squadron was declared unfit for service. Squadron VP-42 was sent home and relocated to Whidbey Island, Washington. Ken was assigned to be the Training Officer and as such, had to re-train and re-qualify the Squadron. Once Squadron VP-42 status was upgraded to mission ready, Ken was reassigned.

In 1965, Ken was selected to be an Aide to the Chief of Staff, Supreme Allied Commander Atlantic, in Norfolk, Virginia. Ken reported to Patrol Squadron VP-56 in 1967 based in Patuxent River, Maryland, where his third child, Marisa Lee was born in 1969. In 1970, Ken attended the Naval War College Junior Command and Staff Course in Newport, Rhode Island.

By 1971, Ken had reported to the Chief of Naval Operations, as the Assistant for Governmental and Industrial Liaison to the Director of Anti-Submarine Warfare Programs, located in the Pentagon in Washington DC. In 1973, Ken was assigned as the Commanding Officer of the

Naval Facility Centerville Beach, in Ferndale California. In 1975 he returned to the Naval War College in Rhode Island, for Senior Warfare coursework.

In 1976, he was assigned to be the commanding officer of the Navy Recruiting District in Pittsburgh, Pennsylvania for three years. During this time he was promoted to the rank of Captain. In 1979, he received orders to be the Commanding Officer of Naval Air Station Adak, Alaska. From 1981-1985, Ken served his last tour of duty as the Commanding Officer of Personnel Support Activity in San Francisco, California. In total, Ken served his country for 29 years and was awarded the Navy Silver Star.

Ken not only was an exemplary officer but he was an accomplished dog trainer. He discovered his love of training Labrador Retrievers while stationed at Whidbey Island, Washington. Ken was a duck hunter and wanted a hunting dog to retrieve his birds. Over a period of several decades, he had refined and honed his training skills on hundreds of dogs. Some of his proudest accomplishments came later in this process. His young dogs went on to become National Field Champion’s (FC) and Amateur Field Champion’s (AFC) with FC AFC Code Blue, FC AFC Painters Major Motion, FC Baypoint’s Shades of Bleu and numerous Derby winners.

Ken leaves a legacy of loyalty, integrity, honor and honesty. He taught his family to be responsible and hard-working. He had a saying, “If you’re going to do something, do it right the first time. Don’t do it half-assed.” Through the years Ken left a legacy of being a dependable, constant husband and father. He was the family’s moral compass, and drill sergeant all at the same time. His love of country music, his great dancing skills, his love of eating a hot dog and a cold drink, and his ability to always laugh at his own jokes before the punchlines will be missed. Thank you, Ken, Dad, Papa, and great grandpa for being who you were no matter who was around. Thank you for being a teacher and an example to all of us.

Ken’s remains will be interred at Tahoma National Cemetery in Kent, Washington. In Lieu of sending flower, please consider donating to the Cystic Fibrosis Foundation at www.cff.org.

To send flowers to the family or plant a tree in memory of Kenneth Lee , please visit Tribute Store
Wednesday
13
July

Share Your Memory of
Kenneth
Upload Your Memory View All Memories
Be the first to upload a memory!
Share A Memory
Send Flowers