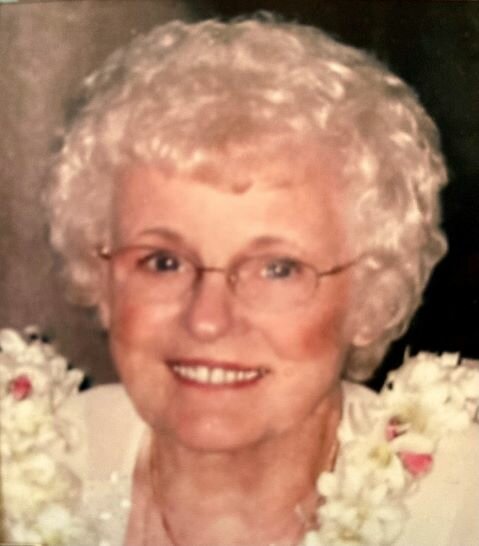 Patricia Ellen (Flaherty) Goodell joined her heavenly family on March 12, 2022. She made her transition peacefully after enduring many health setbacks in the past several months.

Patricia was born February 16, 1930, in Crandon, Wisconsin to Edward and Ellen Flaherty. As a young child she traveled by car with her family from Wisconsin to Washington State. She was so excited to finally see Mt. Rainier, but also disappointed because she had been told it was called Rock Candy Mountain and she was just sure she was going to have lots of candy when she got there. Sadly, it was just a mountain.

Patricia grew up in various places in Washington and Oregon, with her family settling down in Puyallup where she attended Spinning Elementary, and Puyallup Junior and Senior High School. It was there that she met the love of her life, Donald Goodell. Donald and Patricia married on October 28, 1949, in Puyallup, where they made their first home and lived most of their life together. They had very special and fun anniversary celebrations over the years. Especially their 25th, 50th, and 70th anniversaries.

Patricia loved flowers and working out in her yard. She was a retired florist, having worked many years at Cliff Florists, and for a few years she had her own floral shop – Patricia’s Floral and Gifts. Patricia was a member of the Tacoma Yacht Club Shipmates, where she was honored to serve on their Board. In 1985 Donald was the Tacoma Yacht Club Commodore and Patricia was at his side, graciously serving as Commodore’s wife. Boating was a huge part of Patricia’s life. She and Donald owned a few yachts, but their favorite was named after her- the “Patricia E”. They spent innumerable summers in the San Juans cruising and enjoying the beauty of the Pacific Northwest. Patricia had a knack for making friends wherever they traveled. She even made friends at the places she shopped in the Summit/Waller area. From Albertsons to the Hallmark store, the Dollar Store and Sterino Farms, she made friends along the way with employees who worked at them all.

Patricia was a member of Summit United Methodist Church and attended service regularly for decades, where she worshiped with friends and family over those years.

Patricia was proud of her Irish ancestry, and fortunate to have traveled to Ireland three times. She also loved to travel with Donald to Hawaii. The Kona area of the Big Island was her favorite Hawaiian destination, with anywhere on Maui being a close second.

Patricia was preceded in death by her parents, sisters Catherine Haworth and Dawn Carl, and granddaughter Marissa Goodell. There will be a celebration of Patricia’s life later this year.