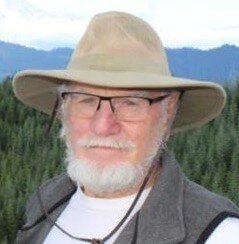 James (Jim) Helmold, age 88 of Sumner, WA passed away on December 16, 2021. He was predeceased by his wife Ethel Helmold and is survived by his  brother Richard Helmold, his four children Janice (Jay) Pendergast, Karen (Charles Schroeder) Helmold, Thomas (Debbie) Helmold, Susan (Landon) Byersdorf; his nine grandchildren William Schroeder (Nicole), Tyler Schroeder, Silas Schroeder, Adam Murgittroyd (Jordan), Sarah Anderson (David), Dylan Langel (Natalie), Brian Helmold, Ashley Helmold, Jordan Byersdorf (Michael); two great-grandchildren Parker Schroeder and Calvin Langel as well as step grandchildren and great grandchildren.  Jim graduated from Sumner High School class of 51. He then served in the US Navy and spent time in Alaska but lived the majority of his life in the Sumner area where he was a custom home builder, electrician and plumber.  He loved nature and exploring the outdoors summiting most peaks over 10,000 feet in WA including Mt. Rainer two times, hiked the Wonderland Trail around Mt. Rainier with his family, built custom strip kayaks for himself, his kids and many other family members to enjoy time on the water including the Bowron Lakes in Canada, enjoyed skiing and river rafting through 2020 and was hiking his routine 2.5 mile path up to the end.  He will be missed by his family and friends who will continue the adventures he began.  There will be a memorial service held on Saturday January Twenty Second at 12:30 at Creator Lutheran Church in Bonney Lake, cookie reception following.  In Lieu of flowers the family recommends donations to Leukemia & Lymphoma Society.

Share Your Memory of
Jim
Upload Your Memory View All Memories
Be the first to upload a memory!