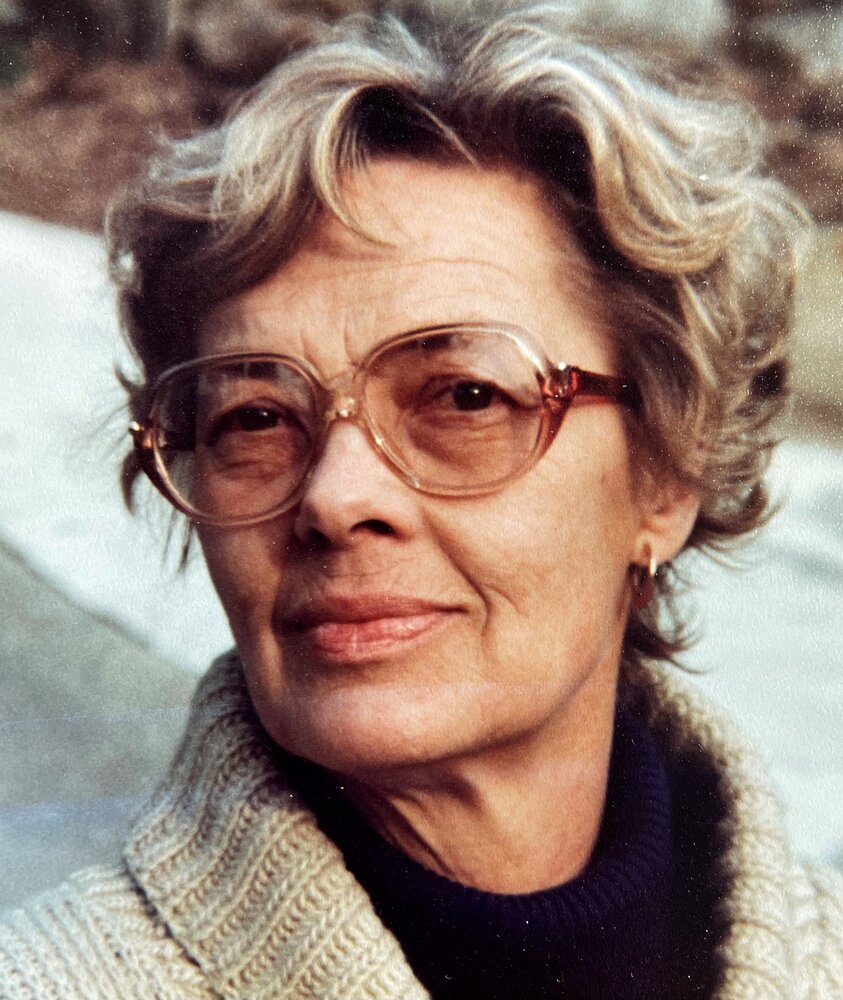 “The world is complicated” she whispered to her dear friend Ruth while raising her ﬁnger in a familiar teacher’s gesture.  Those were her last words.  A few days later on Oct 6, 2021, Belva Maxine (Johnson) Hearing died peacefully in her Bellevue, Washington home at age 97. Born December 31,1923 in Idaho Falls, Idaho to Klea S. Sinclair and Calvin A. Johnson, Maxine and her young family moved to Grays Harbor, Washington in 1926.  She was ‘big sister’ to brothers David ‘Ray’ and Calvin ‘K’.  Growing up in Paciﬁc Beach, she excelled at school, music and sports, graduating valedictorian from Moclips High School.  She was 17 when the war broke out and her quiet seaside town was turned into an anti-aircraft gunnery school ﬂooded with young servicemen. She recalls the air raid black-outs along Paciﬁc Beach and helping the women in her community set up a refuge hut for the soldiers where they could play cards and listen to music. Maxine entered Brigham Young University as a freshman and later transferred to the University of Washington where she graduated with a BS in Psychology.  She took a 5th year at Central Washington College to gain her BA in Early Education.  While at the UW she met a tall All-American Husky oarsman through a Sigma Kappa Sorority sister. She married Ed Hearing on the then popular Bride & Groom Radio Show in 1949 and kept him on his toes for almost 63 years until his death in 2012. She had an eager start to her teaching career with Seattle Public Schools at View Ridge Elementary followed by a decade at Van Assalt Elementary where she met Ellen, a seasoned colleague  who would become her mentor and closest friend. She taught
part-time as a substitute teacher while raising her young daughters Holly and Tracy, but missed the rigors of full time teaching.  Once her own girls were in school, she dove back into teaching at Bellevue’s Overlake School where she reﬁned her methods and went on to teach ABE, ESL and GED to adult students at BCC (now Bellevue College).  She was a passionate and talented educator, an active advocate for adult literacy, and a persistent corrector of one’s grammar. She tutored local students with reading disabilities and foreign adult students in English language. There were often foreign exchange students at the house during the summers, and she stayed in touch with many of them. In 1961 Maxine and Ed built their lakefront home in Bellevue.  She adored her Enatai neighbors including the ladies of the Killarney Bridge Club who gathered regularly for over 40 years. She played tennis and golf with measured determination.  After retiring, she and Ed spent time each Spring on Maui playing golf and snorkeling.  From Paciﬁc Beach to Kamaole, she felt at home by the sea.  She was an avid gardener and a willing ﬁrst mate during family cruises to the San Juan Islands.  Maxine was a member of DAR, Delta Kappa Gamma Society of Professional Women Educators, and the LDS Church. She held a strong testimony in the Mormon gospel.  Her motto was, ‘Have faith and seek knowledge’ and she lived her life asserting that the two are complimentary. Her last years were challenging but Maxine adapted with great courage.  She remained positive in attitude and mentally astute  to the very end.  As a voracious reader, she felt a huge loss when she could no longer read her large print books.  She rejoiced in her later years to receive the immense beneﬁt of the NLS Talking Books program. She was grateful to be able to remain in her
beautiful home through the dedicated care received from her daughter Tracy and her beloved friend and caregiver Janet. Maxine is preceded in death by her husband Ed, both of her brothers and two sister-in-laws.  She will be buried with Ed at Tahoma National Cemetery in Kent, Washington. A Memorial Service will be held at the Church of Jesus Christ of Latter-day Saints Bellevue Ward at 12:noon on November 27, 2021. In lieu of ﬂowers, please consider a donation to Washington Talking Book and Braille Library or a charity of your choice.

Share Your Memory of
Belva
Upload Your Memory View All Memories
Be the first to upload a memory!
Share A Memory