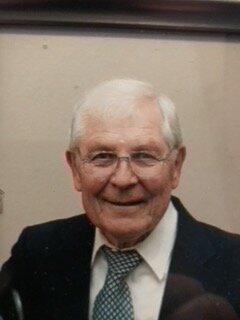 Johan Marvin Klopstad, age 88, passed away on October 15, 2021. He was born October 27, 1932, in Sumner, Washington. Marvin was the only child of the late Rasmussen Olai Klopstad and Anna (Ritscher) Klopstad. For most of his childhood, he was raised by his grandparents, Oma and Opa Helmold. He was baptized at German Ev. Lutheran Church in Puyallup and was confirmed at Peace Lutheran Church in Puyallup. Marvin graduated in 1950 from Sumner High School. In 1955, he enlisted in the United States Navy for two years and was stationed aboard the USS Falgout. Marvin was very proud to have served his country. After an honorable discharge from the Navy, he worked in the lumber yard until 1958 when he was hired as an electrician for Seattle City Light. He worked at Newhalem, Diablo, and Ross Powerhouses at the Skagit and at the Sullivan Creek Hydro Project in Spokane. He retired from Seattle City Light after almost 40 years.

Marvin married Dorothy Roberta Schenk in 1954. Marvin is predeceased by his wife of 66 years who passed away in May 2021. Marvin is survived by his son, Dennis Klopstad, his daughter Linda Moreno (husband Ray), and two grandchildren Ray Jr. (wife Alison) and Anna. Marvin was very proud of his children and grandchildren and would often tell people how proud he was of his children.

Marvin loved gardening, watching Mariner and football games, researching his family history in Norway and Germany, and telling lots of stories about his childhood.

Marvin was a kindhearted son, father and grandfather and would do anything for his family.

A special thank you to the staff at Brookdale Foundation House and CHI Franciscan Hospice and Palliative Care for their loving care and support during his time there and during his final days.

To send flowers to the family or plant a tree in memory of Johan Klopstad, please visit Tribute Store

Share Your Memory of
Johan
Upload Your Memory View All Memories
Be the first to upload a memory!
Share A Memory
Send Flowers