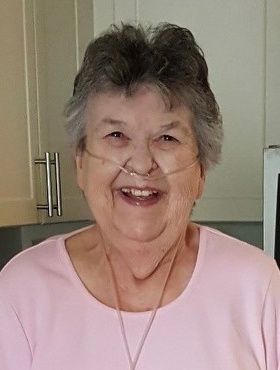 Joan Adeline Brown was born on June 4, 1940, and passed away peacefully July 30, 2021, with her family who loved her beyond measure by her side.

Born in Sisseton, South Dakota Joan was one of seven children born to Frank and Ruth Schmaus. When Joan was a teenager, the family moved from South Dakota to the greater Seattle area. Joan was a graduate of Bothell High School.

In 1958 Joan married Russell Brown, who was also from Sisseton, South Dakota.  In 1965, Russell and Joan moved to Sea-Tac, Washington where they raised two boys, Russell and Ronald. They were married more than 50 years at the time of Russell’s passing.

Joan worked for Pacific Northwest Bell, for 26 years, retiring in 1993. Joan and Russell moved to Deer Lodge, Montana for 10 years following retirement to spend time with Russell’s family before returning to Washington to spend more time with their children and grandchildren.

Joan had an easygoing personality. She was happiest when she was spending time with her family both near and far away. This is what she missed most during the recent pandemic. Visits through the window were no substitute for hugs, but Joan made the best of the situation, never complaining because that is just who she was.  In her free time, she enjoyed bird watching, crocheting, quilting, solving word puzzles, and reading. Her quilts and crocheted items were treasured gifts. Joan especially enjoyed playing games and looked forward to the times her sister Dianne and her brother-in-law Rich would visit for a round of Mexican Train Dominoes or Yahtzee.

Joan is survived by her son Russell (Kathy), sister Dianne (Rich), grandchildren Roni, Tabitha, Sara, Jacob, and Mackenzie, and great grandchildren Robbie, Derek, Bailey, Christopher, and Wyatt. She is also survived by many nieces and nephews.  She is predeceased by her husband Russell, parents Frank and Ruth, son Ronald, and siblings, LaVern (Vern), Delores, Marlys (Molly), Roger, and Ronald (Ronnie).

In her 81 years, Joan touched the hearts of many. She was dearly loved by her family and friends and though she will be missed, she will always hold a special place in the hearts of those who knew her.

Donations in Joan’s memory may be made to,

Share Your Memory of
Joan
Upload Your Memory View All Memories
Be the first to upload a memory!
Share A Memory