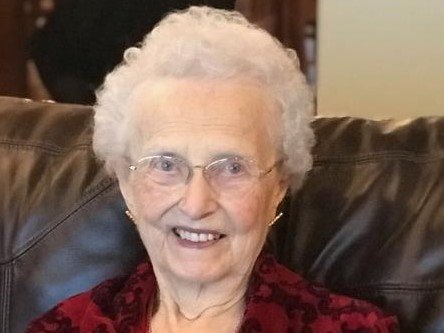 Born in Southern California, to Karl and Anna, natives of Switzerland, she died at age 90 on August 5, 2021.

Known as Betty, or Batie to her Swiss family and friends, she migrated to Washington state in 1933 with her family when her father and uncle, Josef, came north to begin operating dairy farms near Stanwood and Conway. There she helped with farm chores and attended Milltown School and Conway Grade School before graduating from Mount Vernon Union High School.

After high school, Batie enrolled at Everett Community College and began a course of study at Everett Providence Hospital in the nursing program. After training that included stints at Children’s Orthopedic and Providence hospitals in Seattle, Northern State Hospital in Sedro Wooley, and Sacred Heart Hospital in Spokane, she graduated from nursing school and worked as a registered nurse for almost 40 years before retiring in 1991. She continued her life of caregiving, even after retirement, by doing whatever she could for family, neighbors and friends.

In 1958 Batie married Walter Baur, whom she had met six years earlier at a Swiss dance while vacationing in Los Angeles and to whom she was married for over 63 years. That same year, they purchased an unfinished residence in Puyallup that would be their home for nearly 60 years. In the 1960s, three surviving children, Joseph, Susan and Laurie, were born to the Baurs. The family maintained a bountiful garden and always had a mini-farm that included goats, sheep, rabbits, calves, ducks and chickens.

Batie was very proud of her Swiss heritage. She was an active member of the Swiss Ladies Society and looked forward to attending and working annual Schwingfests and other Swiss community events held at the Swiss Sportsmen’s Club in Bonney Lake. Batie and Walt truly cherished their Swiss Park membership and the friends that they made there. Twice, in 1991 and 1995, Batie and Walt took trips of a lifetime to Switzerland where they visited relatives and Riggi, Schtos, Zermatt, Bern, Schweiz, Zurich, Santis and Pilatus.

Batie is survived by husband Walter; sister Mary (Terry); son Joe (Suzie) and daughters Sue (Eric) and Laurie (Scott); grandchildren Doug, Nicole, Lauren, Olivia and Sophie; and cousins and many nieces and nephews. She was predeceased by her parents, five siblings, and infant daughter Mary.

A funeral will be held on Wednesday, August 11 (viewing 10:00 am, rosary 10:20 am, funeral mass 11:00 am) at St. Andrew Catholic Church in Sumner.  A luncheon and celebration of life will follow at the Swiss Sportsmen’s Club in Bonney Lake.  The family asks that the unvaccinated wear a mask.  In lieu of flowers, donations may be made to the American Cancer Society or the Swiss Men’s Society Scholarship Fund 9205 198th Ave. E., Bonney Lake, WA 98391.

Share Your Memory of
Elizabeth
Upload Your Memory View All Memories
Be the first to upload a memory!
Share A Memory