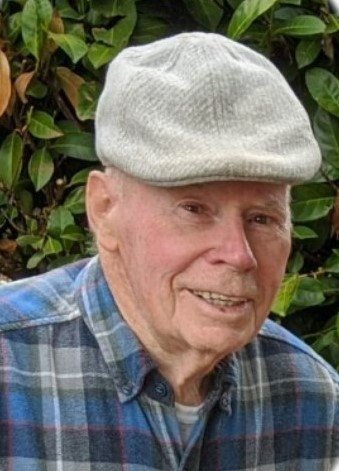 Robert “Bob” Meeker, ‘Sonny’ to his sisters and ‘Pa’ to his grandchildren and great-grandchildren, passed away at home Tuesday April 20, 2021. He would have been 89 in July.

Bob was born in 1932 in Chicago, Illinois to James & Agnes Meeker.

In 1963, he married Yvonne Gores Waddington and inherited a ready-made family with Gary, Dan, & Annette. Teresa joined the family in 1964, they moved to Puyallup and Rodney came to complete the family in 1965.

Don Weaver, Bob’s best friend, introduced him to the “Mormon” Church as a boy. Bob’s new young family were baptized members of the Church of Jesus Christ of Latter-day Saints six months after they he and Yvonne were married. They were sealed as an eternal family in the Idaho Falls Temple in 1964. He served faithfully in many capacities in the Church including several Ward and Stake Missions and 13 years serving in the Seattle Temple.

In his younger years, Bob loved working on old cars. He worked at Boeing for 30+ years, and after retiring, he had a lot more time to work on his never-ending projects around the yard and fixing things in the garage. His favorite past-time was going to garage sales. He rarely missed an episode of Wheel of Fortune and Jeopardy, his two favorite shows. Most especially, he loved his dear wife and enjoyed visits from family.

Bob is preceded in death by his parents James & Agnes Meeker; daughter Teresa and sister Ruth.

John 11:25-26 …I am the resurrection, and the life: he that believeth in me, though he were dead, yet shall he live: And whosoever liveth and believeth in me shall never die.

Funeral services will be at the Church of Jesus Christ of Latter-day Saints Sumner Stake Center 512 Valley Avenue Sumner Washington Saturday May 1st 11:00am and available via Zoom. https://zoom.us/j/91466478593?pwd=NStTTmkxMG5nZStoMUNpN1pJaU5Ydz09 Passcode: 325885

To send flowers to the family or plant a tree in memory of Robert Meeker, please visit Tribute Store