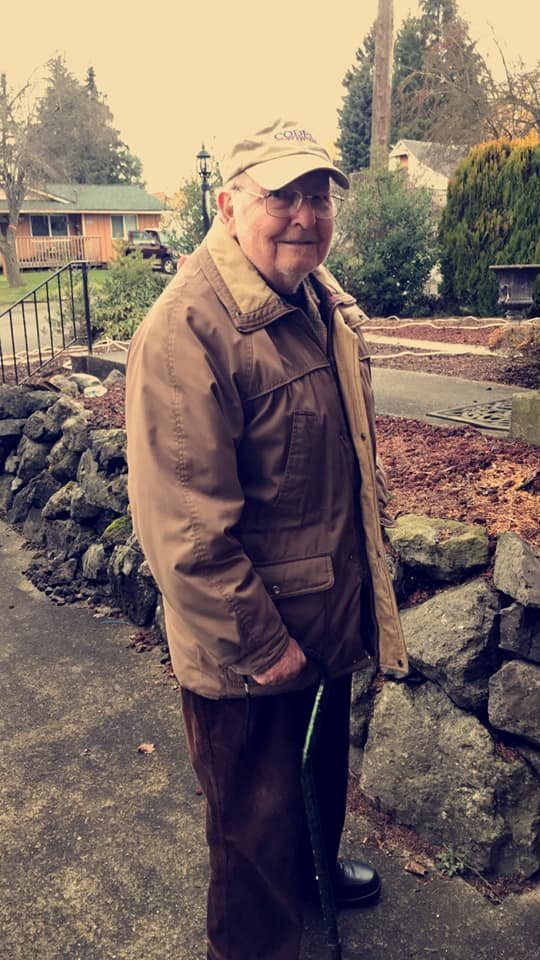 To Eugene and Cleone (Pew) Dursma.

Ralph was a very small baby when he was born, at that time considered a preemie. He was so small his bed was a dresser drawer. Wrapped in blankets his mother would sit him on the wood stove to warm him.

In 1944 Ralph traveled by train to Tacoma, Washington with his mother and 5 siblings to join his father.

Ralph graduated from Lincoln High School, in Tacoma in 1953. Upon graduation he enlisted in the army in 1954.  After Basic training, Ralph was shipped to Guam and then sent to Tinniun, and onto Saipan.  In 1956 he was sent to Ft. Lewis in Tacoma, Washington where he was a specialist 3rd Class.  He was discharged in 1956 and went into the Reserves where he spent the next 5yrs. He was a Lifetime member of the Amvets.

Upon returning from the Army, he met and married Sandra L. Hoffman. They enjoyed dance and skating together at Kings Roller Rink.

Ralph and Sandra Welcomed 3 children in their time together. Ralph worked for the Boeing Co for 15yrs, working his way up from a Ribitor to a Printer.  Ralph then worked for Del’s Printing which became Cascade Printing, and retired from United Printers in 2000

In 1972 Ralph met Myrna and they were married in 1973. They loved to Dance, play cards, and enjoying family gatherings.

Each year Ralph and Myrna would have their Annual Christmas Bash inviting 50+ people to their home for drinks, food and lots of fun. They loved to play cards with family members once a week, for money saving their winnings and at the end of the year went on vacation.

Ralph’s beloved wife Myrna got sick in 2010. Ralph cared for her at home with the help of his daughter Andrea and his granddaughter Cassandra.  Myrna went to her forever heavenly home in 2012.

The next 8yrs years Ralph continued to live life to the fullest, finding great joy in spending his time with family, kids and grandkids and ALL EXTENDED FAMILY.

After a long illness involving his heart and lungs Ralph went to his Heavenly home on March 19th, surrounded by his loved ones

His grandchildren, Nathan and Cassandra Prideaux, Alexandra and Kaitlyn Straling, and Doug Dursma,

As well as Many family members

Ralph was Preceded in Death by his son Wade, brothers, James and Jerry Dursma and Sister, Gloria Krasean

Ralph will be interned at Tahoma National Cemetery

At a time still to be determined.

To send flowers to the family or plant a tree in memory of Ralph Dursma, please visit Tribute Store

Share Your Memory of
Ralph
Upload Your Memory View All Memories
Be the first to upload a memory!
Share A Memory
Send Flowers