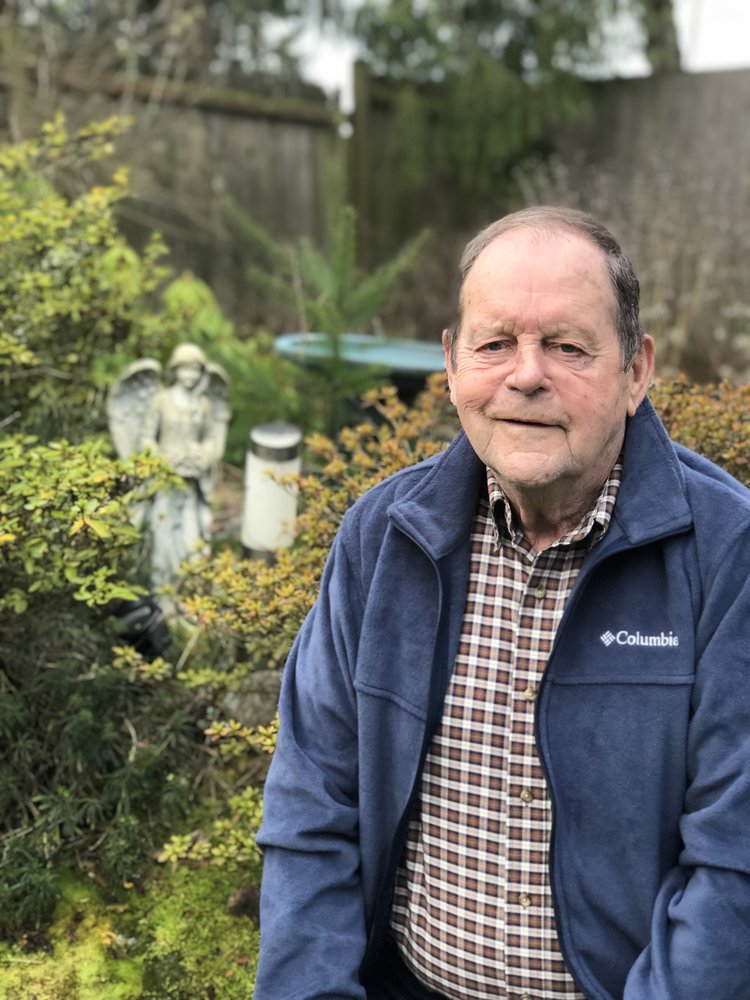 Thomas Larson passed peacefully on Friday, March 6 with his family by his side.  Tom was born on April 28, 1938 in Portland, Oregon to Carl Edward and Agnes Alzora Larson.  The second of 7 spirited boys; Larry, Tommy, Ronny, Jimmy, Donny, Freddy and Kenny, the family lived in the small town of Gilchrist, Oregon where is father worked in the mill and mother part time in the local diner.  After graduation from Gilchrist High School, Tom joined the Air Force.  Stationed at Lackland Air Force Base in San Antonio, Texas, he met the love of his life, Josephine Bosmans.  They married just months after meeting on November 14, 1959 and was warmly welcomed into the Bosmans family.  Together they spent the next 51 years creating beautiful memories until Josie passed on April 10, 2011.
His military career spanned 20 years with stops in San Antonio where their twin daughters Tamara Ann (Tammy) and Cynthia Gail (Cindy) were born.  Cynthia passed at birth.  Daughter, Theresa Eileen (Terri) was born a year later in Bend, Oregon.  Son, Carl Lee was born in Omaha, Nebraska and son, Bryan Keith was born in Glasgow, Montana.  In addition to the states where the children were born, the family adventured to Mississippi, Colorado, California, North Dakota, Washington and New York making wonderful friends along the way and finally settling in Lynden, Washington upon Tom’s military retirement in 1977.
Tom used his GI bill to return to college attending Western Washington University at the same time his daughters did and graduating in 1984 with a Bachelor of Arts in Business Education.  After earning his degree, Tom worked at WWU in admissions, then at Cascade Business College and for the City of Lynden.
Tom was a terrific bowler, a competitive golfer and enjoyed the annual deer hunting trip with his brothers which took him back to his childhood home in Oregon.
When his first grandchild was born in 1990, Tom and Josie decided to move south to Puyallup, to be closer to the the thing that they treasured the most in life, their family and grandchildren.  Over the next 20 years, Grandpa and Grammie doted on their grandchildren: Stefanie, Kellie, Jordan, Sean, Shelby, Kylee, Thomas and Landon.

Tom was preceded in death by his beautiful wife, Josie, his parents, Carl and Agnes, and his younger brothers, Jim and Kenny.  He is survived by his daughter, Tammy (Reed) Zulauf of Puyallup and their children Stefanie (Jason) Wert and Kellie (Braden) Sherman,  daughter, Terri (Sean) Bradley of Anchorage, Alaska and their children Jordan (Wrangel) Jensen and Sean Bradley II, son Carl (Erin) Larson of Miami, Florida and their children Shelby, Kylee, Thomas and Landon and son Bryan (Tammi) Larson of Wasilla, Alaska. He is also survived by 4 brothers many other relatives and friends.

Family and friends are respectfully invited to attend the Funeral Service.

To plant a tree in memory of Thomas Larson, please visit Tribute Store

Share Your Memory of
Thomas
Upload Your Memory View All Memories
Be the first to upload a memory!
Share A Memory
Plant a Tree