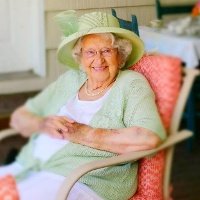 Maudine Jean (Swalander) Rushton, 94 of Puyallup, WA was reunited with our Heavenly Father on August 9, 2019 at Puyallup, WA with her family by her side. Maudine was born to the late Oscar and Maude Swalander in Blackwell, Oklahoma on February 28, 1925. As a young child the family moved to South Hill in Puyallup to the family homestead. Maudine grew up, proudly honoring the family’s Swedish heritage and graduated as Salutatorian of her senior year at Puyallup High School. She met her husband, the late Billy Ray Rushton at a dance at the Fruitland Grange and they went on to marry in 1943. Maudine was the oldest of 5 children, next was her late sister, Dorothy Norris of Puyallup, WA, her sister, Evelyn Hess of Omak, WA, brother, Edwin (Rose Leah) Swalander of Elma, WA and sister, Janet (Robert) Aschenbrenner of Rainier, WA. Together Maudine and Billy had 7 children. She was preceded in death by son, Donald (Kathy) Rushton and daughter, Candace (Eric) Anderson, both of Puyallup, WA. Surviving children are daughter Mary Rushton of Puyallup, WA, son, Perry (Elaine) Rushton of Graham, WA, daughter, Deborah Rushton of Tacoma, WA, son, Charles Rushton of Puyallup, WA and daughter, Trina Rushton of Puyallup. Maudine had the uncanny ability of making each and every one of us feel like the most important person in the world when she was talking to you. We all claimed to be her favorite. However, next to her children, her greatest love was her grandchildren. She proudly could share current events with each of them. She had 54 grandchildren, 66 great grandchildren and 13 great great grandchildren. She was preceded in death by great granddaughter Zoe Rushton, great grandson Brady Anderson, granddaughter Pamela Whinnery, granddaughter Maude Fauson and granddaughter Kristy Spencer. Maudine was a member of the Church of Jesus Christ of Latter Day Saints and raised her family as such. In her life she wore many hats. Some of those, besides being daughter, sister, wife, mother, grandma and aunt were nursing, retail work, restaurant owner and most recent was being caregiver to her grandkids. She was everyone’s counselor, no matter the situation. Her late husband, being a member of Alcoholics Anonymous relied on her wisdom, loving care and honesty to help them and their families when needed. A celebration of her life will be held at the LDS Stake Center on South Hill, 13420 94th Ave E, Puyallup, WA 98373 at 11:00 AM on Saturday, August 17th. There will be a reception to follow.