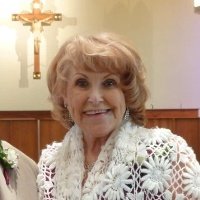 Gladys (Volk) Paulson, daughter of the late Steve and Veronica Volk, was born on April 2, 1943 in Drake, North Dakota and returned to the Lord on June 25, 2019. She now joins the love of her life, William (Bill) Paulson, Jr., who preceded her in death on Sept 15, 2016. Gladys met Bill while he was stationed in her hometown of Minot, ND. Six short months later they were married on April 20, 1963. During Bill’s service in the United States Air Force, Bill and Gladys lived in many states, as well as Germany and Italy. They settled in the Tacoma/Puyallup area after Bill’s retirement from the Air Force in 1979. Gladys was a devout Catholic and lived with a strong faith in God which guided her throughout her life. While in Washington, she attended Our Lady Queen of Heaven in Tacoma, WA and most recently All Saints Catholic Church in Puyallup, WA. At the time of her death, she resided in Puyallup, WA. Gladys loved playing the guitar and singing at family get-togethers and was a member of a few country bands playing on base, around the communities she lived in, and later for retirement homes. She is survived by her five children whom she loved dearly and was proud to have raised: Suzanne (Jim) Gordon of Tacoma, WA; Sandra (Tom) Dobbs of Tigard, OR; Sheryl (Tom) McFadden of Graham, WA; William Paulson, III of Tacoma, WA; Veronica (Jason) Kaipainen of Puyallup, WA. She is also survived by many beloved sisters and brothers: Angie Blonigen of Carrington, ND; Joyce Keyes of Minot, ND; Bea (Wayne) Heatherly of Springfield, TN; Patricia (Gary) Aber of Pleasant Valley, NY; Stephen (Judy) Volk of Carrington, ND; Doug (Deb) Volk of Vancouver, WA; Virgil (Terry) Volk of Vancouver, WA; Veronica (Ken) Guynup of Puyallup, WA; as well as 14 grandchildren, four great grandchildren, and many nieces and nephews. Gladys is also preceded in death by her sister, Loretta Puppe and brother, Richard Volk. Gladys’s life will be celebrated on Tuesday, July 9 at All Saints Catholic Church, 503 3rd St SW, Puyallup, WA at 11:30; Rosary will be at 10:45. She will be interned with her beloved Bill at Tahoma National Cemetery in Kent, WA.